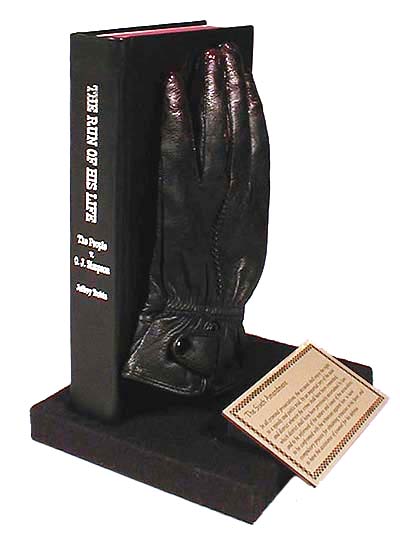 In all criminal prosecutions, the accused shall enjoy the right to a speedy and public trial, by an impartial jury of the state and district wherein the crime shall have been committed, which district shall have been previously ascertained by law, and to be informed of the nature and cause of the accusation; to be confronted with the witnesses against him; to have compulsory process for obtaining witnesses in his favor, and to have the assistance of counsel for his defense. 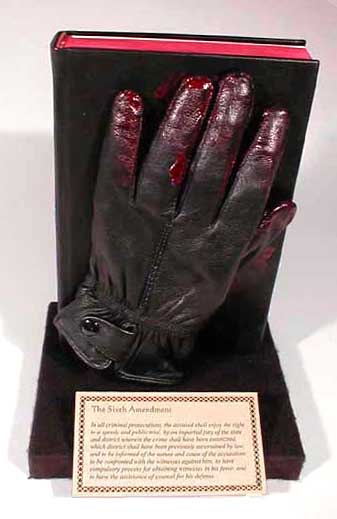 The Run of His Life : The People v. O.J. Simpson
by Jeffrey Toobin.

This was the most public trial in history, with many questions about the jury, witnesses and defense counsel. It occupied the television networks day and night. Before the trial began, this author wrote in The New Yorker that the defense would play the "race card" and claim Mark Fuhrman was a racist who was framing Simpson because he was black.

The prosecution made a major error by having the accused try on the bloodstained black leather glove, which had shrunk, with an additional latex glove to prevent biocontamination. Simpson made a show of not being able to get it on. The defense line was "If it doesn't fit, you must acquit." 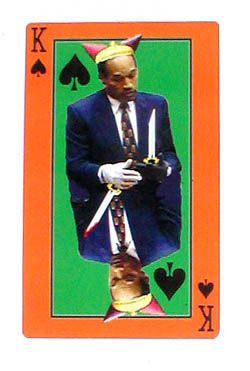 The binding is black leather, with doublures (inside cover) and hinge of the same leather. A black leather glove is on the cover, and acrylic paint. The title is foil stamped in P. T. Barnum, a typeface chosen because of the circus-like environment of the trial. The endpaper (left) is designed to represent "The Race Card."

Right: close-up detail of "The Race Card" on the endpaper. It represents the defendant trying on the glove, holding a big knife (rather than the traditional sword), with blood dripping from the lower knife.

click to return to the main Bill of Rights Edition page

The Bill of Rights edition is in the permanent collections of
Yale University Arts of the Book Collection
The Art Institute of Chicago Ryerson & Burnham Libraries
Click the links above to make an appointment to view this work.

Read the review in The New York Times

To continue the exhibition, click one of the sections or a button

Each section has several thumbnail images and descriptions of the works. You can click on any image for a page about that work, with larger pictures and details.